Not much to blog about, but didn't want to go too long between post. I'm enjoying being at home with Madelyn. Lazy days are mostly what we do. It is great. I've fit a little sewing in at night. I finally spent my gift card to Everything Scrapp'n that UC gave me back in Feb. The stuff came in today. It's giving me the the itch to go clean off the scrap side of my table and get busy. We'll see if Madelyn cooperates with that!!

I finally took pictures of the baby book the Whores made. You can see it at We Scrap Better blog. It is several post down, so if you go looking for it, be sure to scroll down. It was such a great surprise when I got it in the mail. The Whores have been full of surprises. I got a package from MJ and Liz in the last few weeks. Both awesome stuff from my Target register. As an added bonus, if Madelyn outgrown them or gets to where she doesn't need them, they will be great scrap storage stuff!! MJ (and Dan) sent a closet organizer and Liz sent a set of wicker baskets. Thanks again girls (and Dan)!!
at April 29, 2008 No comments:
Email ThisBlogThis!Share to TwitterShare to FacebookShare to Pinterest
I've finally found a minute to blog the last week. I know you have to be super impressed with the amount of blogs I've done lately... I think this makes at least 4 this month.

I've had several people ask about how labor went and all the other fun details...so be warned the next paragraph is about labor. Nothing to gruesome. Wesley and I got to the hosptial about 5 am. By time I was admitted and to a room it was about 530 when they started my IV with the pitocin drip. According to the monitors, I was already having contractions, but couldn't really feel them. The doctor came in about 715 and broke my water. Contractions got closer together, but I still couldn't really feel them. I think it was about every 3rd or 4th one that I felt. Once they started showing they were closer together, I went ahead and asked for my epidural. I got staydol (maybe that's spelt right) in my IV in the mean time. I really think this would have been enough to cover the pain because I was totally loopy once it hit me. I was with it and then all of the sudden had no care in the world. The nurse came in about 930 to check me and said I was dialated to about a 6. She told me to let her know when I felt pressure and she went ahead and called the doctor. It wasn't long before the pressure started. While the doctor was suiting up, I pushed once for the nurse. The doctor sat down and at 953 am, Madelyn Kate wiggled her way out with no more assistance from me. She has been wiggling the entire 9 months and hasn't stopped yet.

Prior to leaving they told us her bilrubin levels were slightly elevated, meaning she had jaundice. This is very common in breastfeed babies. We made an appointment to see the peditrician on Friday to have levels rechecked. They were a bit higher than they were at the hospital. We were told to let her be in front of a window and get sun light 3 times a day for at least 30 minutes and to make sure she eats at least 1-2 ounced every 3 hours. We went back today and her levels were back down. Yay for not having to have her little heel poked again tomorrow!!

Check back later for woes of feeding....

go here for lots of Madelyn Kate pictures
at April 19, 2008 3 comments:
Email ThisBlogThis!Share to TwitterShare to FacebookShare to Pinterest

We're home from the hospital. I know everyone wants to see pictures, so I'll just get right to them....

I'll post about delivery and the hospital stay later.
at April 17, 2008 6 comments:
Email ThisBlogThis!Share to TwitterShare to FacebookShare to Pinterest

I have not only been a slacker as a blogger, but also on most things. I joined a Secret Sister swap back in February. We had to alter an item and send $10 worth of scrapbook stuff. I got Kelly, and she wanted a bag like my mom had made for a previous swap. I finished it tonight.

So that's her bag...let's see how long it takes me to get it in the mail~!

a close up of the embroidery.

I have had request for last minute belly pictures. So I had Wesley take them earlier tonight. Over look the mismatch clothes...I'm to the point I wear what fits whether it matches or not. I'll be 38 weeks on Friday.

This will probably be my last post til after Madelyn Kate gets here. I'll try to be a better blogger while I'm at home on leave, so check back often!
at April 09, 2008 5 comments:
Email ThisBlogThis!Share to TwitterShare to FacebookShare to Pinterest

it's been a LONG while

I am such a horrible blogger. I keep telling myself I'll be better, I'll blog more often, yet it doesn't happen. There has been soo much goin on in the last few months, that blogging gets pushed to the back burner. Let me try to catch everyone up (not that you don't already know what's been going on!)

February was not to eventful once we got through the first week. We had 3D ultrasound done. For those that haven't seen the pictures yet, they are on my myspace page. It was a really cool experience. I would recommend it to anyone that is pregnant. We got to see Madelyn Kate's face and other features. It was so super clear. If we have another child we will for sure do it again, we might ever opt for the video of the entire thing.

March was also not too exciting, even though it seems we stayed busy every weekend. My doctor didn't want me traveling more than 45 minutes after about week 34, so the weekend of my 34th week Wesley and I made a trip to Birmingham to see the Ezells. I had not been to see them since they moved. Kristy has been working her butt off, she's an accountant and it is their busy season. I had a baby shower at work and got lots of awesome things, including two hand made quilts. My mother-in-law and sister-in-law also organized a baby shower for me. It was at their church in Troy. Again, I got lots of awesome things. I also spent a lot of March packing. We found a house in Troy and moved on March 29th. I had most everything packed prior to everyone showing up to help us. My Mom was a big help. She came over several days when she got off work to help. I wouldn't have gotten it done without her. She did most of the lifting and moving full boxes. Saturday the 29th started early. We had a ton of family and friends show up to help. We had so much help we moved everything in one trip. I'm still working on unpacking and putting things away. A lot of this got done on the 29th thanks to Nickie Bateman hanging out and helping me. She wouldn't let me lift anything. Just wanted me to tell her where to put things. We got several rooms finished and the others started.
This past Tuesday morning was startled by my in-laws. They were beating on the door at 6:15 am. I had left my cell phone in the car the night before (this rarely happens) and no one could get up with me. They came to tell me that my aunt Cindy had taken my Mom to the ER. At this point they weren't sure what was wrong. I went and got my phone, that had also died and found a cord to hook it up to the laptop to get a little charge. Of course I had left my charger at work! I called my sister to see if she was in Troy. I then got dressed and headed to Opp. When I got there I was told that Mom would have to have surgery. Her appendix had ruptured. It was so infected that the surgeon left the wound open to heal from the inside out. I spent a lot of last week in Opp at the hospital. Mom was released yesterday afternoon. She is staying at Grandma's for a few days, mainly because Grandma insisted. I also had diapers and wipe baby shower yesterday afternoon. We have most everything we need, so a diapers and wipe shower was perfect. I got lots of diapers and wipes! We won't have to buy any for a while.

A quick baby update...
I'm not sure if I posted that I had to change doctors because the Opp hospital is not delivering babies anymore. I changed to one in Enterprise. It has really worked out for the best since I work in Enterprise. I can run to my appointments during lunch and not have to take any leave. At my last appointment the doctor thought she might be breech. We scheduled an ultrasound to confirm which way she as facing. Thank goodness she is not breech. I have new pictures and will try to scan them, but probably won't get around to it before she is born. Wesley and I have also decided we are going to use both Madelyn and Kate. I have said the entire time I wanted to call her by both names and Wesley agrees it will be easier. I think it will help keep people from shortening it to Maddy, which as you all know was Madyson.

Only 3 weeks left until my due date...will she be early or hang out late? I'll let you know! 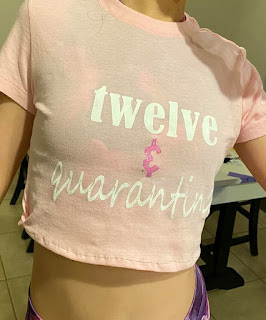